This month has been a flurry of activity! We had family from Ohio visiting at the beginning of the month and midway through the month, Madelyn and I travelled back to Virginia to be the ones visiting! Throw in Jon’s birthday, our 5 year wedding anniversary, Madelyn’s 1st birthday and school starting back up, and you’ve got a busy month! 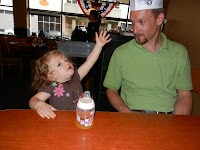 Jon’s birthday was first. It was very low-key, as he wanted, with just the three of us going out to dinner at our favorite diner downtown – Sam’s. Jon and Madelyn sat together and entertained each other until dinner arrived. After dinner we took a walk downtown and genuinely had a pleasant evening. 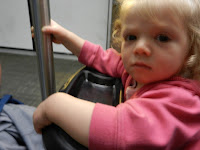 The Virginia trip was also very nice. I scheduled more time this trip than we have had in the past and it was great to not be so rushed and scheduled as we usually are during the visits. This is Madelyn on the train in the airport heading to the plane. She saw that I was holding onto the pole, so she did too.
Madelyn wasn’t as ‘flight friendly’ this trip since she can stand on her own and is a very speedy crawler. She somehow managed to escape once during the flight and darted down the aisle! She made it about 5 rows up before I could snatch her because I was “securely strapped in with the seatbelt” in case there was turbulance 🙂 She is, however, an exceptionally friendly child and I had to on several occasions apologize to the passengers because she was touching them or wanting to take their belongings as we were waiting to get to our seats.
Once in Virginia, I realized that I had forgotten how dreadfully hot and sticky it was in July. Just standing still in the shade made you sweat! I think we will forgo future visits during the summer months 🙂 We were able to see almost all of Jon’s family and even a few of my friends from the area. Madelyn and I were able to see my roommate from college, Molly, and her daughters Mila and Gwendolyn.
In Richmond, we were able to spend a lot of time with my family, my friend, Brooke, and catch up with a few old friends 🙂 We had a wonderful time and I am truly thankful that Madelyn and I can travel so much to keep in touch with the East Coast relatives and friends.