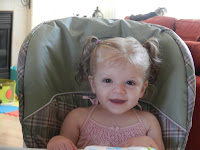 Madelyn has never really played with kids her own age. She’s always wanted to be with the big kids, even before she could crawl. She loves going to Kids Club on the weekends while I’m at the gym. I often come back to get her after my class and she’s not in the ‘little kid section’, but out in the main part of the room with kids up to 12 years old! She’d just be crawling around, yelling and pointing at them.
This weekend when I returned to get her and didn’t see her with the little kids or the big kids! I started to panic a bit. In looking closer, I did see her, standing on the dancing video game machine playing with a 7 year old! She was jumping around on the flashing squares and hitting the buttons that were flashing on the console. I wished I had my 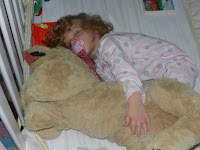 camera because it was so funny!
Even today I went to get Madelyn from school and Miss Georgia told me that she did not want to miss out on the big kid story time! She threw a fit until she was brought into the room to hear the story 🙂
A few weeks ago we bought her this large yellow lab stuffed dog. I have never seen a child take to a stuffed animal as she has with ‘Rufus’. She LOVES him! She smiles when she sees him and lunges 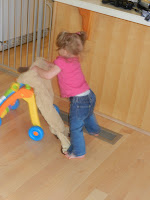 at him. She grabs him around the neck and rolls on the floor with her feet around his middle. She even snuggles up against him whem she sleeps! We keep him in the crib so the novelty doesnt wear off 🙂
So, we decided that she should be ‘Rufus’ for Halloween. We found the perfect Rufus costume! It slips over her head and had ears and a cute little tail. Jon and I have affectionately nicknamed the costume ‘Rufus Carcass’. Interestingly, she does the same thing to Rufus carcass that she does to real Rufus. She rolls around with him and puts him on her walker toy and toddles around the living room. Rufus carcass is now one of her play toys 🙂
Fun Kid Story of the Day:
My first year teaching I had a student who came in about half way through the year with the small scratches on either side of her chin. Some days it was only one scratch, sometimes it was three or four on either side. After a few days, I finally asked her what the scratches were from and she simply replies “My parents got me a bunny. I like to give him kisses, but he doesn’t like them all the time.”