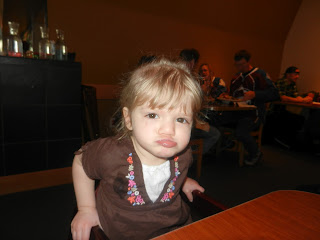 Finally got the answers I wanted to hear!  Madelyn will be getting tubes put in sometime in the very near future and has been referred to a speech pathologist!  She ‘technically’ passed her hearing test Monday, but still had fluid behind her ear on the left side.  The ENT (Ear, Nose, and Throat doctor), after looking in her ears said, “Let’s just cut to the chase.  She needs tubes.”  I was, honestly, excited first, and then relieved.  I have had so many people try to convince me that her speech delay was normal and that it was nothing I needed to worry about.  What everyone seems to be missing is that I need to be able to communicate with my daughter and right now I can’t do that.  She does not have the language to express most things she sees or  tell me the things that she wants.  She should be able to do that.  She is 19 months old with the vocabulary and clarity of a much younger baby.  And that’s not fair to her. 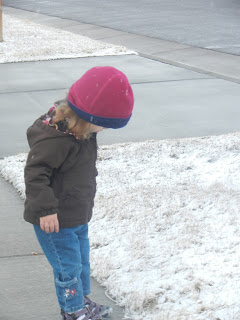 She has gained a lot more words since we had her ears cleaned out, but unless you know her, you may not recognize that ‘da’ means ‘duck’ and not ‘dad’ or that ‘ca…mmmm’ means ‘cow… moo.’  She understands almost everything we say and can respond, sometimes unwillingly, to directions she is given.  She loves playing outside and cries everytime we have to come in, even when it is dark out!  She is so smart and aware of everything that is going on, and I can’t wait until she has the language to say what she is thinking 🙂 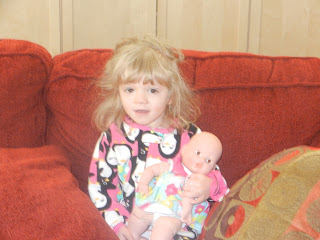 Last night we went for a walk around the neighborhood and we let her actually walk and push HER baby in the stroller instead of us pushing OUR baby in the stroller.  She had a blast!  She would walk a bit, then we would yell ‘Go!’ and we’d all take off running.  She would run for a few steps and then the stroller would go out of control and crash into the grass medians.  She would then say ‘Oh no!’.  Jon and I would laugh and watch her try to pull the stroller out, get frustrated, and then just pick it up and put it on the sidewalk because it was easier than trying to move it around.  Other times she would run, stop in the middle, walk around to the front of her stroller and point at the doll and say ‘baby.’  She is so proud that she is saying it right and can identify her baby whenever she wants.