Easter is the first major holiday we have celebrated completely by ourselves. 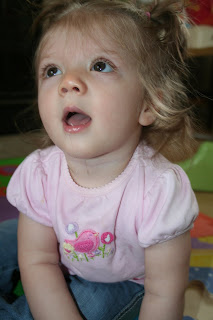 All the other holidays we have either had friends over or have gone back to Virginia to celebrate. The Easter bunny came as expected and we had a wonderful day being together and thankful as a family.
This picture I kind of took on accident as I was playing with different angles of pictures to see what I would get. I thought it was rather ‘angelic’ looking and very fitting for Easter 🙂

The visit from the Easter bunny was the most exciting part. She was actually old enough to investigate her presents herself whereas at Christmas, she was still working on sitting up and wasn’t as interested in playing with too many things. 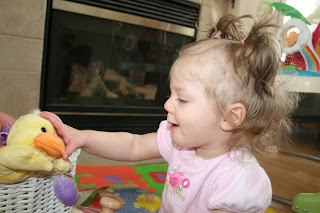 She took apart her Easter basket and absolutely loved the wooden puzzle. Its a really simple 3 piece puzzle with

and starfish. She likes seeing how they taste and banging them together 🙂 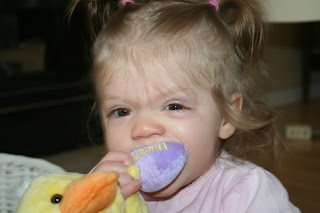 est part of the whole day was probably the pulling of the different things out of the basket and playing with them or tasting them, as that is what most often happens. This is her attempt to show dominance to the duck. Notice the aggressive bite?

She was in desperate need of some jamjams, so I picked her out a few pairs and put them in as well. Apparently she doesn’t like the first two because she kicks them away…

The third pair, however, she grabs onto and hold for a bit. The jammies are the big kid kind that are two pieces, so they don’t have feet in them (She’s so dag on tall that she grows out of her pjs in length only when they have feet. ) 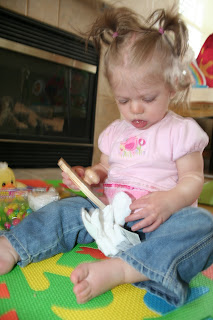 The Easter bunny brought her some socks to go with the jams.

She was more interested in the sock tag than almost any thing else in her basket. She played with them for several minutes.

She found the clucking chicken for dad

and the chocolate Reese’s 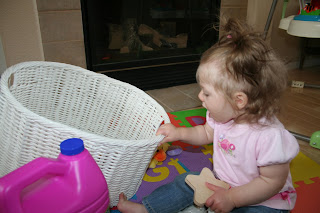 eggs for mom and dad. She also got some bubbles for the warmer days of summer. I’m sure those will be a hit! We would have tried them out this weekend, but its been cloudy here the last few days. After she had found all the goodies from the Easter bunny, she kept looking in the basket to see what else was there 🙂

Fun kid story of the day: We are talking about famous Renaissance people and why they are well-known. One of the figures is Queen Elizabeth I, who is the daughter of Henry VIII. I’ve always been fascinated by Henry and am fairly knowledgeable about the family tree, so we started talking about the 6 wives of Henry VIII and their relationships in history and in some cases to each other. I get finished with the family tree and this one kid raises his hand and says “I don’t know if I can use this word in your class” He pauses, and I walk over to him so its not said too loud – I try to honestly and tactfully answer any question the student asks. He continues with, “But was Henry VIII like a pimp or something?” I chuckle a bit to myself, then explain that no, Henry VIII was NOT a ‘pimp’ because he was actually married to all the women, just at different times. A pimp doesn’t marry the women. I left the conversation at that.