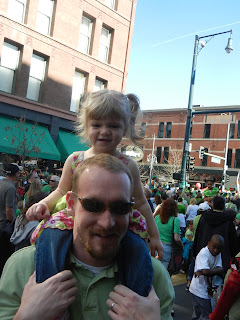 For those of you not fortunate enough to be in or around Denver today, You. Totally. Missed. Out!!!  Today was an absolutely gorgeous day that was perfect for being outside and walking around downtown.  Sure, you were there with probably 100,000 of your closest new best friends, but, hey, at least everyone was happy, especially the guys in the green shirts 😉

We left a little later than we intended to make it to the parade  this morning.  Traffic was busy and once we finally found a spot, free, I might add, and we walked in.  I guess I was expecting to hear lots of bagpipes and cheering and bands and such, but it was quiet.  At first, I thought maybe we missed it because we were late.  In looking around, there were still tons of people, so there was no way it was over.  Then we heard cheering and headed that way. 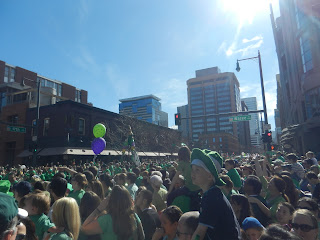 When we got to where the crowd was, it seemed like there was a parade, but not one we would be able to see.  Jon put Madelyn on his shoulders so she might see something, but I’m not really sure she did.  We were about 12 people-rows back from the front lines and saw virtually nothing. People kept trying to walk through and all you could really see was the person or two in front of you, so we decided to leave and try further on down the street. 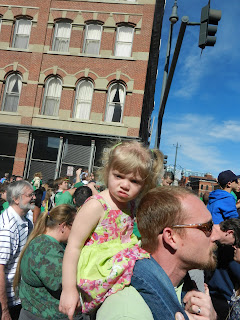 We’ve only been to one other parade in Denver for St. Patrick’s Day and it was dreadfully cold.  The spot we stumbled upon was great because there was a raised area.  Jon, Madelyn, and I made our way towards what we hoped was the place where we would be able to see the parade.  Unfortunately, about 200 of our new friends arrived earlier than we did and snagged the spot.  We stood nearby for a while, trying desperately to see ‘something’ and get excited about it. Around this time, Madelyn was losing interest, as evidenced by this photo.  She was starting to get antsy and wanted down. We left vowing that next year we would arrive much earlier and get one of the coveted spots that allow viewers to actually see the parade 🙂 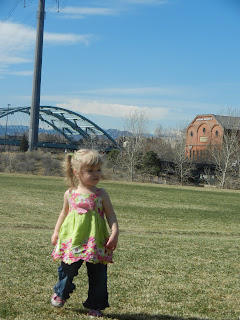 In heading back to the car, we stopped in Commons Park.  Its really just an open space area with a few paths roaming around it and the Platte River running through it.  We actually stopped there Friday night for a bit and let Madelyn run around during our regular Friday Night Downtown Denver walks.
As soon as we got to the edge of the park, she starts saying ‘Out. Out,’ and tries to undo her seatbelt.  We hadn’t planned on playing there, but figured since the parade was a let down, this would be alright.  As I said earlier, the day was gorgeous.  The skies were crystal blue, the weather was mid 70’s with a light breeze, and it was great!  Madelyn got to run around with no jacket, the mountains in the background and just enjoy living in Colorado.  Jon and I even looked at each and said, ‘This is why we live here.’ 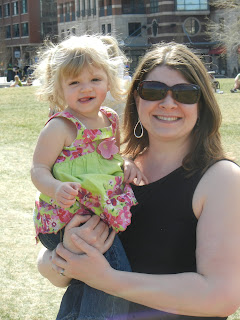 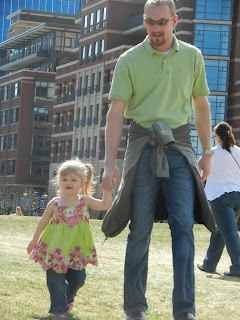 Even though we didn’t get to see the parade, we had a wonderful time get out together as a family.  The walk in was nice, the park was beautiful, and that is what really matters.