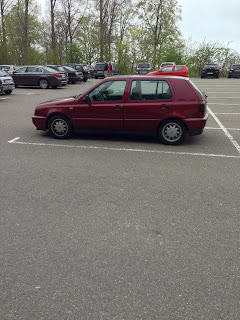 Every weekend we have been here it has rained in Stuttgart.  All day… like the “Don’t want to walk across the parking lot to go to the food court,” kinda rain.  I’ll go out and walk around if its misting or even a really light drizzle for a few minutes.  I’m not gonna melt 😉  But rain rain, I’ll wait it out.  Since we didn’t have a car the first 2 weekends, that made our hotel room REALLY SUPER tiny!

We bought a car on Thursday – a 1996 VW Golf – maroon.  It’s kinda cute in the ‘I’m 16 and have my first car’ way. 😉  Going from driving a Honda Pilot to this beauty has been a bit of a transition.  Its tiny, which is good for navigating the crazy narrow streets, but bad when you are used to keeping everything in your car 🙂

After looking at the weather for Saturday and seeing more rain all day, we decided to see what some of the other town’s weather conditions would be. After looking at the weather and seeing a 0% chance of rain, we grabbed our stuff and left!
Now, 0% chance of rain actually means ‘It will ‘at least mist for about half the day’ in Germany.  It rained our entire drive to Heidelberg and was still misting when we parked.  We didn’t care…Mist is walkable!   The parking garage we chose was on the river through the city, so these were our views walking out – massive houses overlooking the water. They were beautiful! 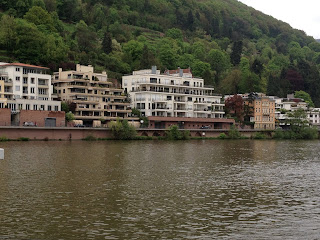 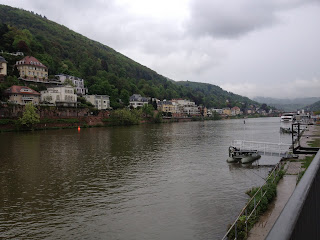 We walked along the river and I took pictures every so often.  There were plenty of photogenic places, so I had to limit myself a bit! We didn’t have any specific place in mind to visit, so we just wandered along the river for a while. 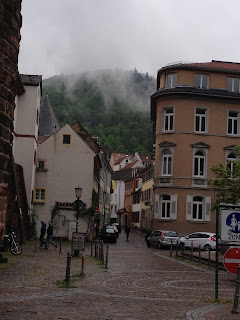 There was a bridge Jon wanted to go see that he thought the original ‘gates to the city’ were at, so we headed in that direction. 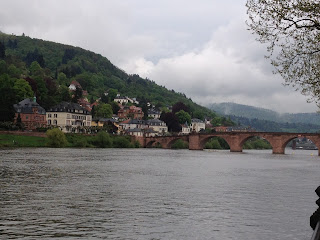 While walking, we found this guy.  Not really sure what kind of bird this is, but he was kinda cool.  The mother bird and babies were down near the water and he was watching them.  He must be some sort of duck, but he was the size of a goose! 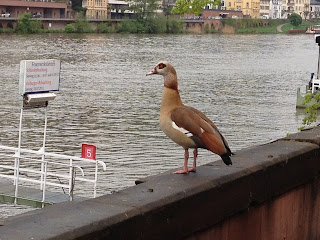 As we got to the bridge, it started clearing off a bit.  There were still a lot of clouds, but the sun was starting to peak out for little bits of time. 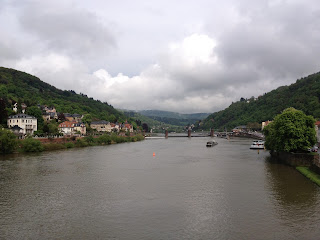 From the bridge, we could see the castle overlooking the city.  It is being renovated right now, so you may see some scaffolding.  Also, it is not on fire.  It is just the fog from the rain earlier 😉 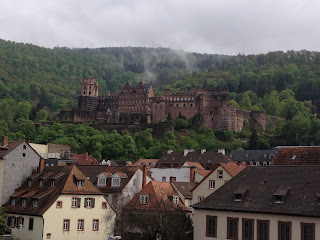 We took our customary photo  with the gates in the background, as best we could. Madelyn was ‘being 2’ at this point and refusing to do anything we asked, so we left her out of this picture 😉 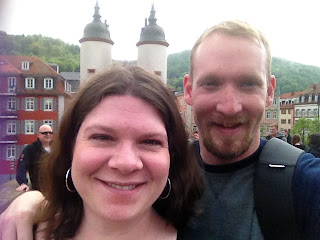 This was the best we could do for a ‘Madelyn’ picture.  Notice Calvin is right there with her . 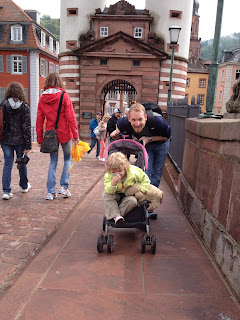 We walked through the gates and into the city.  Following the street from the gates brought us to the main church.  It was in the city square and was impressive to say the least!  It was definitely something that would be able to be seen from a distance. 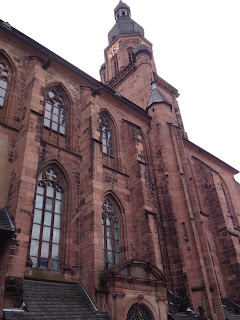 Across from the church was a water fountain with 4 spouts (think Beauty and the Beast) with the castle in the background. 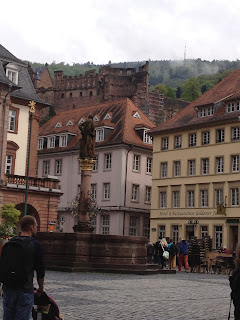 Restaurants and businesses set up tables and chairs in the squares for people to sit at. You can see the castle in the background and the church, if you could see it, would be on the right side of the photo. 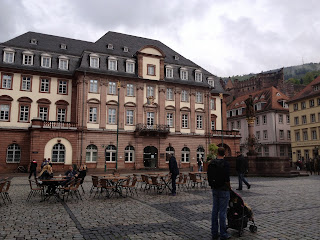 Shops and businesses as we walked around the square. 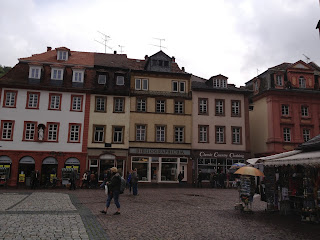 I went into a bakerei (bakery) and found this really cute bread for Madelyn.  Yes, we feed our child bread bugs 😉 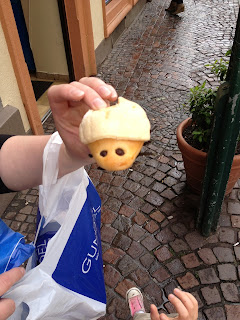 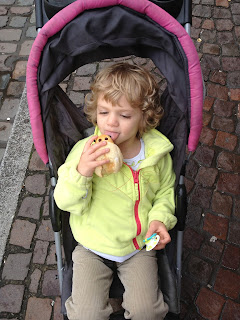 As a side note, I have a mild obsession with the streets here.  This is a one way street, but it seems almost too narrow for a car!  The Golf is definitely better than the Pilot in these cases. 🙂  I will be posting lots of photos of them, I’m sure, as we travel around.  They are just so peaceful and quaint. 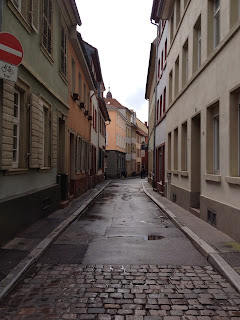 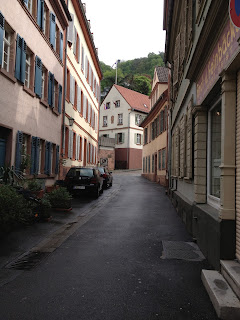 This is an old hotel that was directly behind the church.  Jon is with Madelyn and the stroller in the foreground.  This roughly started a ‘walkplatz’ type area.  That means it is pedestrian only and is full of shops and restaurants.  Think Pearl Street in Boulder, without the cross streets.  It goes on for about 1/2 a mile or so and was a lot of fun to stroll on! 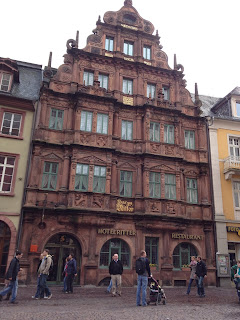 We chose a little restaurant to eat at outside and watched the people go by around dinner time.  Most restaurants have outdoor seating because most places do not have air conditioning.  I was pretty tired by this point and glad to take a break.  It was a great stroll, but at 34 weeks pregnant, I’m not always the most fun for long walks 🙂  We headed back to Stuttgart knowing that Heidelberg is a place we want to go visit again!