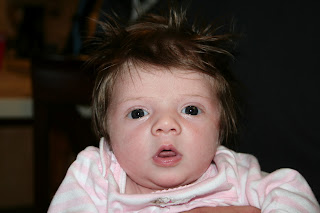 When Madelyn was born, I had grandoise visions of being able to document her life every few days via this blog for her, and friends and family near and far.  I did good for a bit, and then life happened and things got busier.  I have gotten better about taking the pictures, but they always seem to stay on the camera and the evenings get too taken over with all the day to day things that need to happen.  When I do get time, there always seems to be something else that comes along and steers me in a different direction.  I’ve decided to try again because this weekend put things back in perspective.
We have had a really rough winter with Madelyn and illnesses.  When we returned from Christmas vacation, Madelyn had croup.  About a week and a half later, she developed a high fever that took us to the after-hours care where we found out she had an upper respiratory infection.  Almost two weeks to the day was her 18 month check up, and her cough/cold stuff had not gone away yet.  In mentioning it to her pediatrician, she suspected it was sinusitis and put her on anitbiotics for 10 days.
At this check-up, I also expressed my concern about her speech and hearing.  Over the last few months, I have had increasing concerns about her speech and the lack there of.  She is very social and loves being around people, ‘talks’ with them sometimes, but never really says any words.  I remembered writing a card to Jon’s aunt around her one year birthday and she had almost 15 words that I listed out.  At her 18 month, it was maybe 3-4 that were clear and consistent.  She looked in her ears and said they were impacted with wax and she would need to seen an Ear, Nose and Throat specialist.
We saw the specialist and had her ears ‘dug out’, and her hearing tested.  As of right now, she has not passed the screening and we have to go back for a follow-up, again.  She is much more talkative, even in the week that has passed, but is definately still behind.  This has been weighing greatly on mind, and I have spent many hours looking into all the different scenarios and what we can do to help her have clearer speech. 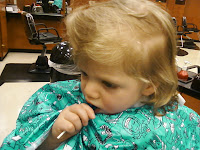 This weekend, things got even more complicated. 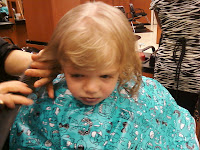 Friday night she was a little congested sounding and a bit irritable.  She had just finished her antibiotics Thursday night and I was like, ‘Really!?!  Not again.’  Saturday was much the same, congested and clingy.  We did take her to get her hair cut, so she looks better 🙂  We put her down to sleep, but got up with her several times by 11:00.  Jon noticed she sounded funny and we turned on the light to see her sucking in at the base of her throat and forcing her stomach out in order to breath.  We immediately left for the ER. 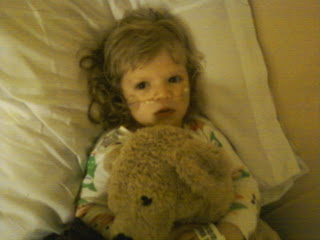 Once there, they tested her heartrate and blood oxygen level.  Her heart rate was 156 when it should be closer to 130, and her oxygen level was 88% instead of 98-99%.  The ER nurse immediately took us to an examination room where she was put on oxygen.  We were told we needed to stay 8 hours for observation and were moved to an observation room.  At the end of that time, they didn’t have an explanation of why she was wheezing and retracting,  They admitted her early Sunday morning. 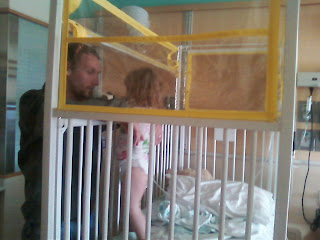 They decided after being there a bit that she had bronchiolitis stemming from RSV.  This means that the lower brochiols in her lungs were clogged and not as able to process the oxygen and send it into the blood.  Because it is spread through coughing, she was quarentined and every one who entered had to wear a mask and gown.  She was really congested and needed to be suctioned out a few times during the day and at night. 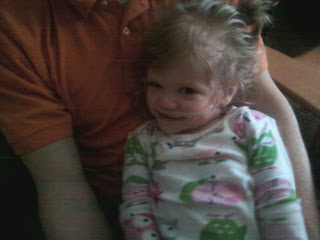 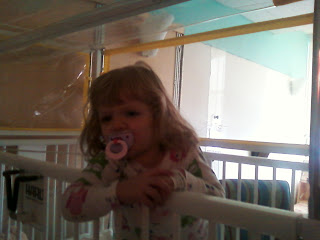 By Monday morning, she was running around the room, even though she was still on oxygen!  We had to ask if there was longer tubing she could move about the room and not be confined to her crib and the chair next to it.  Once she could run, she would go from the door, to the window seat,back towards the door, but around the corner of the crib, before heading back to the door. 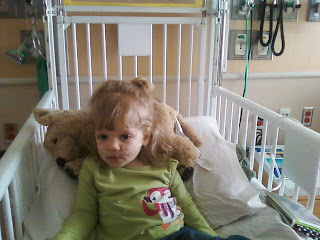 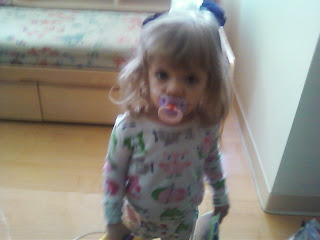 Madelyn was discharged by midday and it was with mixed emotions that we left.  She would still need to be on oxygen at night while she slept for a few days.  As we walked out, we passed a handful of other kids, riding in the wagons around the front lobby that don’t get to leave.  I was so relieved to be able to take my own baby out that I actually teared up a bit walking passed all the other parents that didn’t get to walk out with their little one, healthy and on the mend. 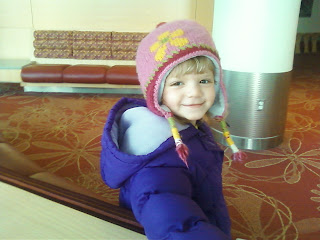 This has been a fairly stressful past few weeks and hopefully this will be the beginning of a healthier and better springtime.  It made me remember how important my family is and to always be thankful for the little things.