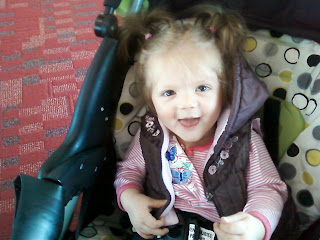 Two weeks ago, Madelyn and I went on a whirlwind visit in Virginia for spring break. We flew in late Saturday night and left at an ungodly early time the following Saturday morning. I loved seeing how green everything was, even if the sun never really came out. All the little flowers were starting to poke through and it was nice not to have to wear sunglasses all the time.

The flights actually went pretty well on the way to Virginia. This is Madelyn right before we boarded the plane. We either had an open seat between us and the next person or we were an entire row. It really does make it much easier to travel when she can sit in a seat every so often by herself and play. I brought the Ipad with us and had loaded a couple of games on there for Mady. She really likes the piano app and the fish that float in the ocean that she has to ‘catch’ 🙂 Its fun to watch her yell and scream at the games in excitement! Hopefully she didn’t annoy too many passengers around us!
We spent all day Sunday with my family. My mom was pretty excited to have all the family together (minus Jon) for the first time! Over Christmas we were all there, but at different times. We also were able to see my sister in law Martha’s family as well. Her parents and sister came for a bit and so did my aunt and uncle from Warrenton. 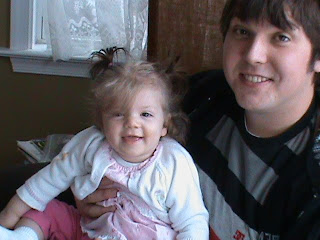 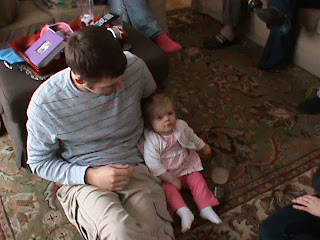 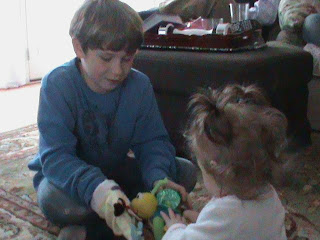 New toys with Uncle Cam (Yes, this really her uncle and not her cousin! 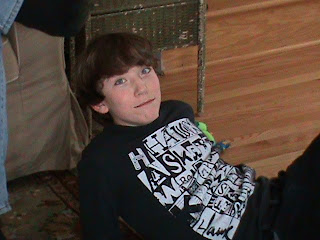 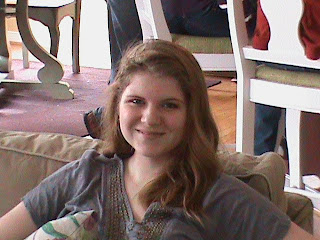 Uncle Gabe and Aunt Natalie
My brothers and sister were absolutely entranced with Mady. They haven’t been around as many little ones as Zach and I have, so it was funny to watch them all together. Madelyn loved the audience. She had the virtual undivided attention of at least 4 people the entire time we were in Virginia. I hadn’t really given much thought to the fact that the youngest two didnt’t even know how to pick her up let alone hold her, feed her, or change a diaper! 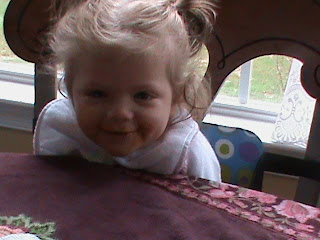 They all wanted to learn how to do that now that she was a little bit bigger and wasn’t as ‘fragile’ as she was at Christmas. It was a riot to get her all strapped into her highchair thing and get her food ready and listen from the other room. She would be talking and food would come out and Natalie would freak and Gabe and Cameron would laugh and laugh. This of course caused Madelyn to laugh and spit more food out 🙂 It was just a gaggle of giggles!
We went to Harrisonburg on Monday and stayed there through Wednesday. Thursday we came back to Richmond and did a little shopping and hung out with Mimi. Madelyn was starting to get a little more unsettled 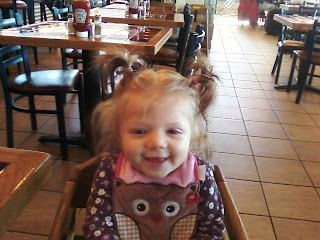 as the week went on, and Friday she woke up with a really bad runny nose. This usually means ear infections, and sure enough, we spent most of the day Friday at the doctor or waiting for prescriptions. Poor little thing was having her 3rd set of ear infections! Of course we had to fly back ridiculously early the next morning, so the plane ride didn’t help anything. This picture is from our layover in Minneapolis… notice the red puffy eyes and half drunk smile? This was because she did NOT sleep for virtually the entire night on Friday…. which means mom looks EXACTLY the same way. “Somehow” my picture got ‘lost’, so, sorry, we can’t compare them 😉
Fun Kid Story of the Day: I have three boys in my last class of the day that need a lot of additional help and support when it comes to their academics. Reading and writing just don’t come easy to them and as a consequence, they often do poorly in any situation that requires any reading. One in particular refuses any help and that in turn causes the other two to be self-concious and refuse help as well. On the last test we took, I was finally able to convince them to let me read the test to them (and support as needed) to see what they actually knew. Now it took almost 2 hours to get it all done with little breaks and such, but two of them scored a 92% which is a B+ and the other scored a 90 which is a high B! I was so proud of them and they were so proud of themselves that they each wanted a copy of their test to take home and one of the kids asked if I would call home and tell his parents 🙂