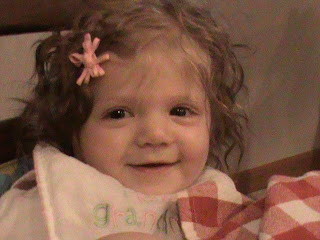 On the Monday after the ‘Great Miller Event of 2011″, my mom drove us to Charlottesville to meet Jon’s dad so he could drive us the rest of the way to Harrisonburg. It was really early, but it gave us more time in Harrisonburg to see everyone.

Since we lived there for so long, I had a lot more people I wanted to catch up with and Jon’s family lives there as well, so our time there was valuable 🙂 This is approximately where the whirlwind took full effect. 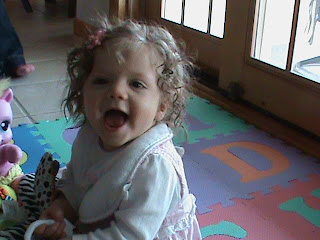 Monday we had dinner with Jon’s parents and went to Broadway and visited a friend of mine I used to teach with in Shenandoah County. 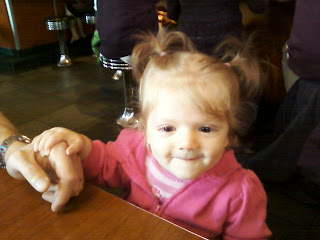 Tuesday morning I met up with my friends Mike and Joyce for breakfast and was surprised by another friend I hadn’t seen in several years! It was great to catch up and see them all again. Madelyn had a lot of fun playing with each of them 🙂
Tuesday night was the big get together at Jon’s parent’s house. His grandparents and sisters were supposed to come over for dinner. Unfortunately, his oldest sister and her daughter weren’t feeling well. They decided to stay home so we wouldn’t get sick too. 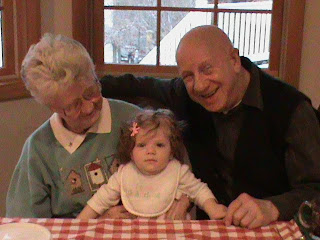 That just meant more time with the grandparents, great-grandparents and uncle Chris and aunt Jennifer. 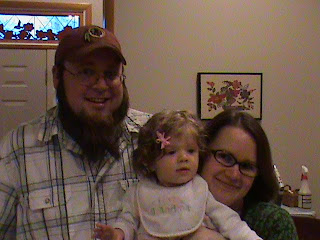 Madelyn enjoyed sitting at a ‘real’ table and not a high chair. If you look carefully at this picture, you will notice that Madelyn actually has her foot up on the table! 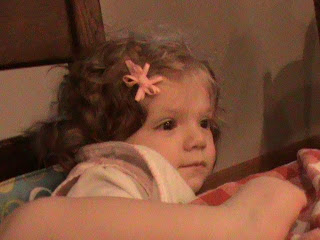 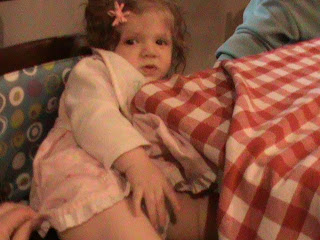 the way up there. I wish I was as flexible as a kid sometimes! Now, this was right before she started to fall over and great grandma had to catch her 🙂

Wednesday was the ‘All About Molly and Mila’ day! We spent almost the entire day with my old roommate and her daughter, Mila. We met up for breakfast in the morning and hung out until lunch time. I left for a bit and had lunch with Jon’s sister that we didn’t get to see Tuesday night as well as her aunt Debbie. After lunch I met back up with Molly and Mila and we wandered around the mall a bit before going to see Rango in the movie theater. The movie was ok, and Madelyn did ok… a little restless in the middle, but that was because she was so tired and just wouldn’t go to sleep. This was a reccuring theme during the trip.
Wednesday night I had dinner with my friend, Sue, from Massanetta Springs and her husband Tyree. I was able to see Sue at Christmas wiht Madelyn, but Tyree didn’t get a chance to see her. After dinner we headed back to Jon’s parents house and got to play with cousin Emily finally! She came over after karate practice to see us. It’s amazing how big she is now! I mean, I’ve only really been gone 3 1/2 years! 🙂 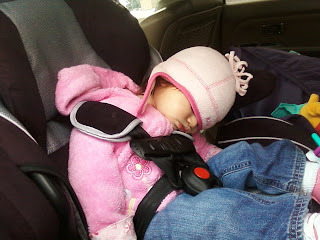 Hopefully we’ll make plans to go out again this summer and see everyone again, but stay a little bit longer. The 6 day trip of two cities by myself about did me in this time. I had a heck of a lot of fun, but it was so rushed the entire time, it stressed Madelyn and I out a bit too much. Her sleeping was off the entire time! Sometimes I would just go out for a drive so she could sleep without anyone being around. There was one day she didn’t nap well and slept for 14 hours straight during the night! I think next time we just need to stay a bit longer so its not so overwhelming 🙂 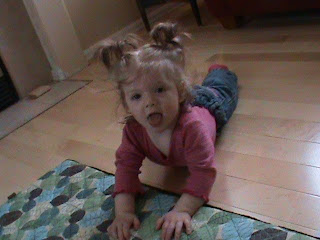 Fun Kid Story of the Day: A bunch of my students are playing on the soccer team this year for 7th grade. I decided since they are playing now during the spring time that I would bring Madelyn to as many games as possible. I often talk about Madelyn at some point during the school day and if I don’t bring her up, the kids will ask me how she is doing and what she has learned to do this week. Well, she got to go to her first soccer game 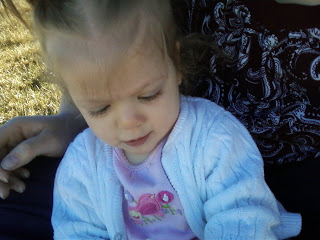 last week and cheer on the teams. It was funny because the B team kids came and sat with us and held her and played with her while the A team was playing and then they switched. The B team game started and the A team kids came over and held her and talked with her during the game. It was very interesting to me to see how many of the kids knew how to hold her and talk to her. A few were curious, but scared of her at the same time. It was just neat to connect with the kids in a totally different way 🙂