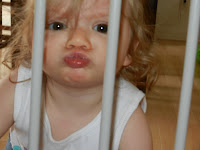 And so its happened.  I always knew it would, but was hoping that my child would be different and forever stay a baby, just like I am forever 24 in my head.  For Christmas this year, Jon’s parents gave Madelyn a gift card to Target with the explicit intructions that it was to be used ‘For Toys Only.’  We’ve held on to it for a while, not really sure what she would use it on.
In January, Madelyn used her gift card to get a stroller and a baby.  She loved playing with her cousin Emily’s stroller when we visited at Christmas, and has loved playing with the baby and stroller since we bought them.  Often at night or at naptime, we find the stroller packed with all her favorite toys that she drives around the house.  It’s quite a collection she puts together sometimes!  The baby and stroller were also the beginning of the end of her baby years. 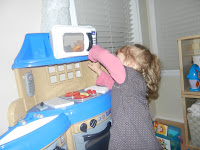 We have been waiting to see what would spark her interest before getting her anything.  A few weekends ago, I went to pick up Madelyn from Kids Club at the gym and had to wait a few minutes.  I got to watch her play without her knowing and those are always my favorite times.  She is just a kid, playing with other kids, and she gets to choose exactly what interests her there because they have so many more toy things.  The whole time I watched, she played a little boy at the toy kitchen – picking stuff up, putting it on the floor, moving it to the counter, opening a door and shoving something else in there and slamming it shut – you know, kid play.  I decided, then, that was what she needed – a play kitchen.  It also was a sad time because it definately signaled the end of her being a ‘baby’ and the beginning of her being a toddler that was ready to move on to the ‘pretend-play’ toys of “Big Kid Land.” 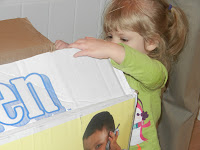 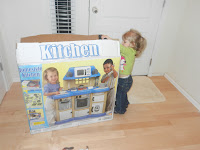 Using her Toy Fund, we ordered a kitchen set online and had it shipped to the house.  From the moment it entered, she was enthralled!  She went right over and walked around it before trying to open it. 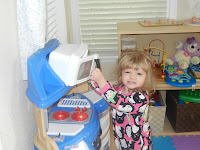 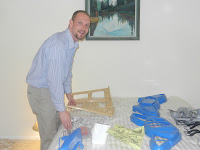 It had tons of small pieces, and Jon decided it would be best to put it together in the guest room so he could put it together over several nights and just shut the door to keep Madelyn and Jack(the cat) out of it.  Saturday, Madelyn and I went out to get some play food so she would have something to cook in her play kitchen.  Right now, she is content with putting stuff in and taking it out as well as bringing us food, one by one…there are 81 pieces of food.  She definately is enjoying it and should be a toy that lasts her a few years.  Thank you Pawpaw and Grandma!