We’ve been here about 12 days now and starting to venture off base a little bit more  The idea of ‘living on base’ is a new one for me and has a novelty all of its own.  There are a LOT of things I like about it – safety, security, familiarity of US customs, taking of American money, etc, that has made our transition from the US to Germany a bit easier.  But obviously, this is not the ‘best’ way to experience Germany.

Our first actual ‘off-base’ adventure was to look for apartment with our realtor.  I’ll just say that was a little overwhelming because it was during rush hour in the city.  People were impatient, there were tons of signs I couldn’t read, and everyone was driving really fast.  It was VERY intimidating and I have a new found sympathy for my students and their families that are newly arrived to America.

Germany has over 300 road signs and most of them are in picture form, which makes it seem like it would be easier, but totally is not.  Throw in some German on the signs, and I have NO idea what anything means 🙂   Their words seem incredibly long because, from what I can tell, almost EVERY word is a compound word of sorts. For example, our sign ‘One Way Street’ is 3 separate words.  In German, it is 1 word,  ‘Einbahnstrasse,’ with ‘ein’ meaning ‘one’, ‘bahn’ meaning ‘ground’ and ‘strasse’ meaning ‘street.’   Literal translation doesn’t match, but I now know the meaning of it!  From what I can tell, there are a lot of word formations that will be done the same.   Not entirely sure how they combine all their words, but hopefully it will make more sense in a few months 🙂 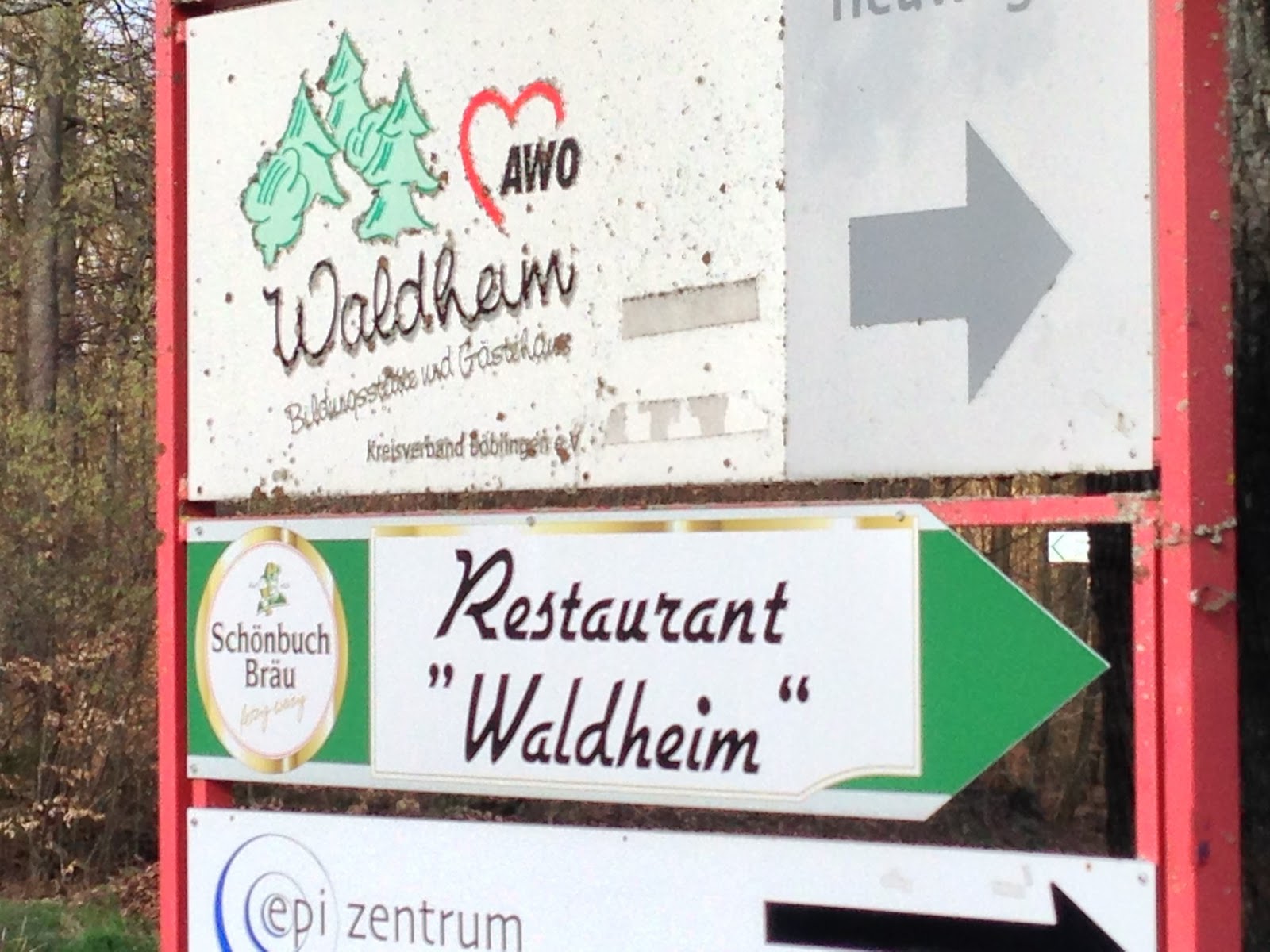 Tuesday night we decided we would walk off base and find a German restaurant we were told was nearby.   It was probably a mile and a half off base, but it was a beautiful afternoon and the weather was perfect. Germans have done an amazing job of having sidewalks, walking paths, crosswalks, and rights-of-ways for pedestrians. 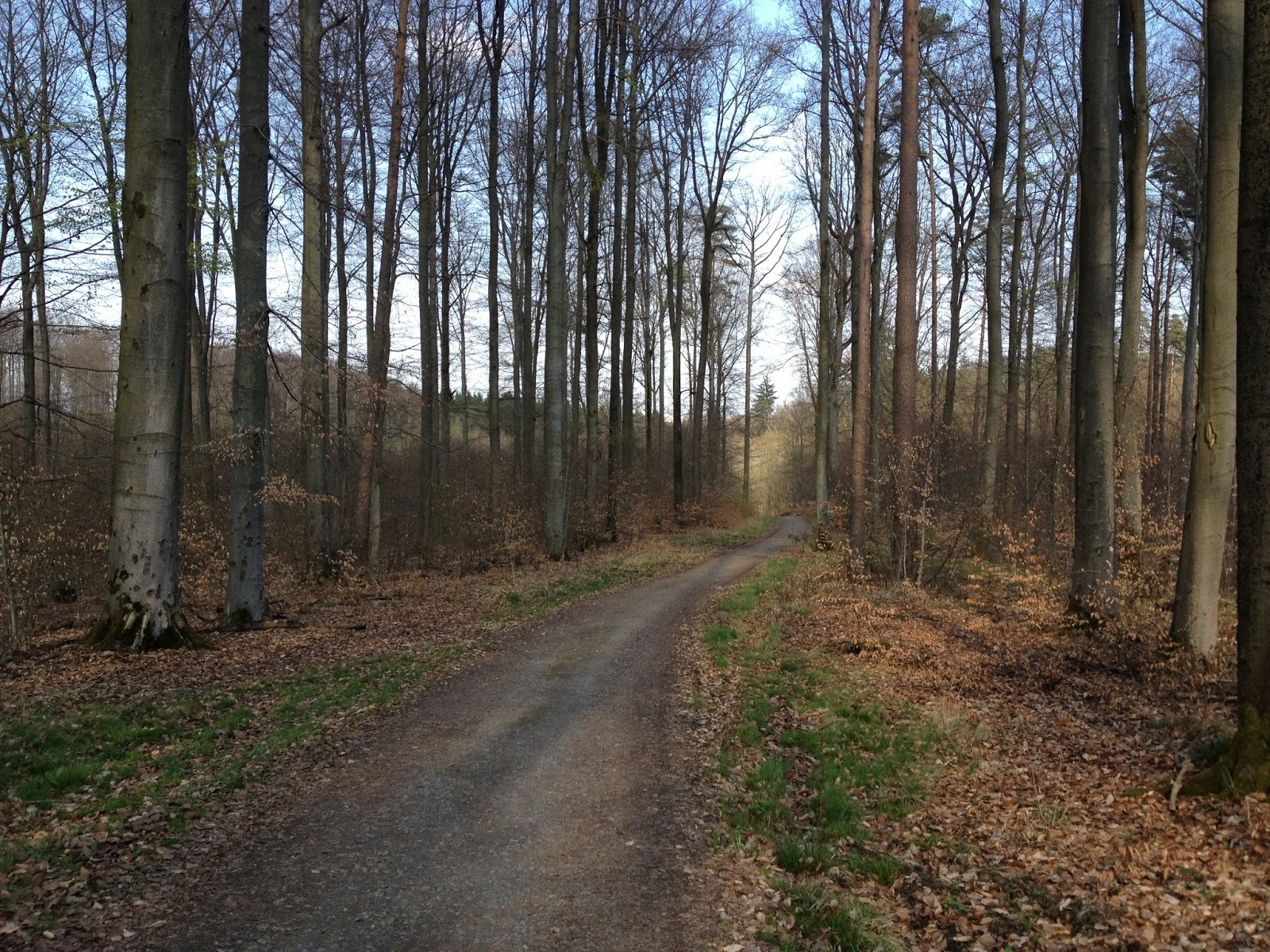 We started down the paths that took us into the woods and should ultimately take us to the restaurant.  We weren’t entirely sure where we needed to go using the paths, but decided we would give it a try.  Before we left, I did put some snacks into the stroller in case our ‘family outing’ became a ‘family fiasco’ and we never found the restaurant and were starving in the woods somewhere 😉

After walking about 10 minutes, we get to this 4 way intersection in the woods.  Not entirely sure where to go, we decide to go left and head back towards the road we SHOULD have been driving down if we had a car.   We found the road rather quickly, but did not see the restaurant.  The road was one of those back country roads that doesn’t have sidewalks or even a place to walk beside the road before you were in the ditch.  There weren’t any cars, so we decided we would walk down in  a bit and if we couldn’t see the restaurant in a few minutes, we would give up, walk home, and have sandwiches at the hotel. 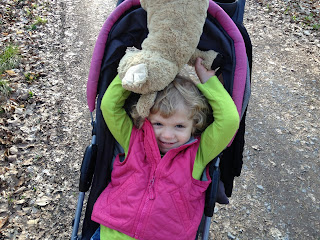 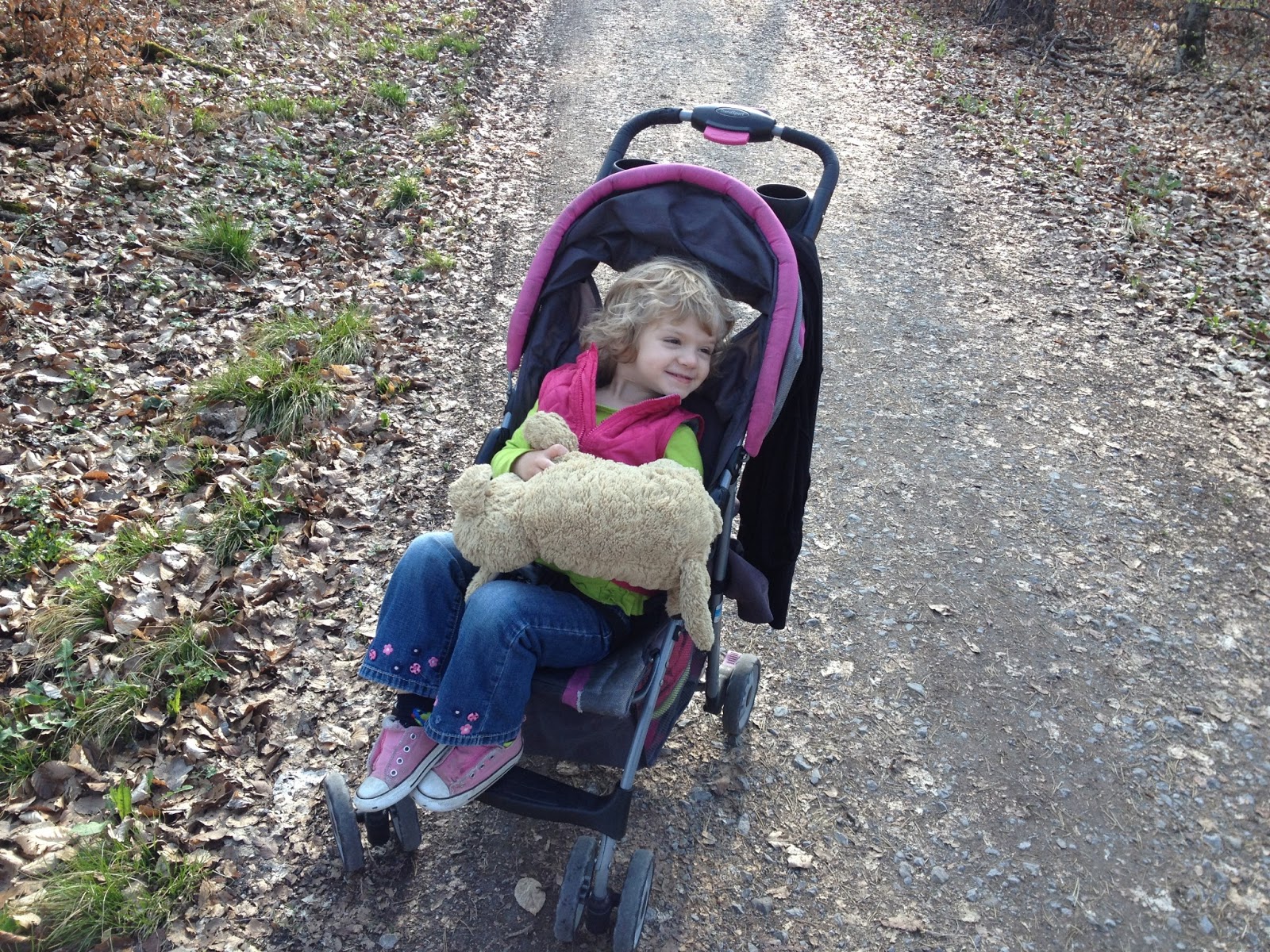 The walk, as I said before, was beautiful.  The temperature was perfect! The sun was shining and there was a little breeze that made it not too hot.  We walked mostly in silence because there is a peacefulness that happens when walking in the woods that takes everything else off your mind and lets you just ‘be’ for a bit.  Madelyn brought along her stuffed dog, Calvin, and also wanted a stick as well to drag along the street.  After about 10 minutes or so we were ready to head back when we saw other people walking ahead of us and turn right down a path into the woods.  We got a little excited because we figured they had to be going somewhere… we hadn’t passed any other roads or even cars since we started down the road, only the occasional cyclist would go by, so this had to be the restaurant! 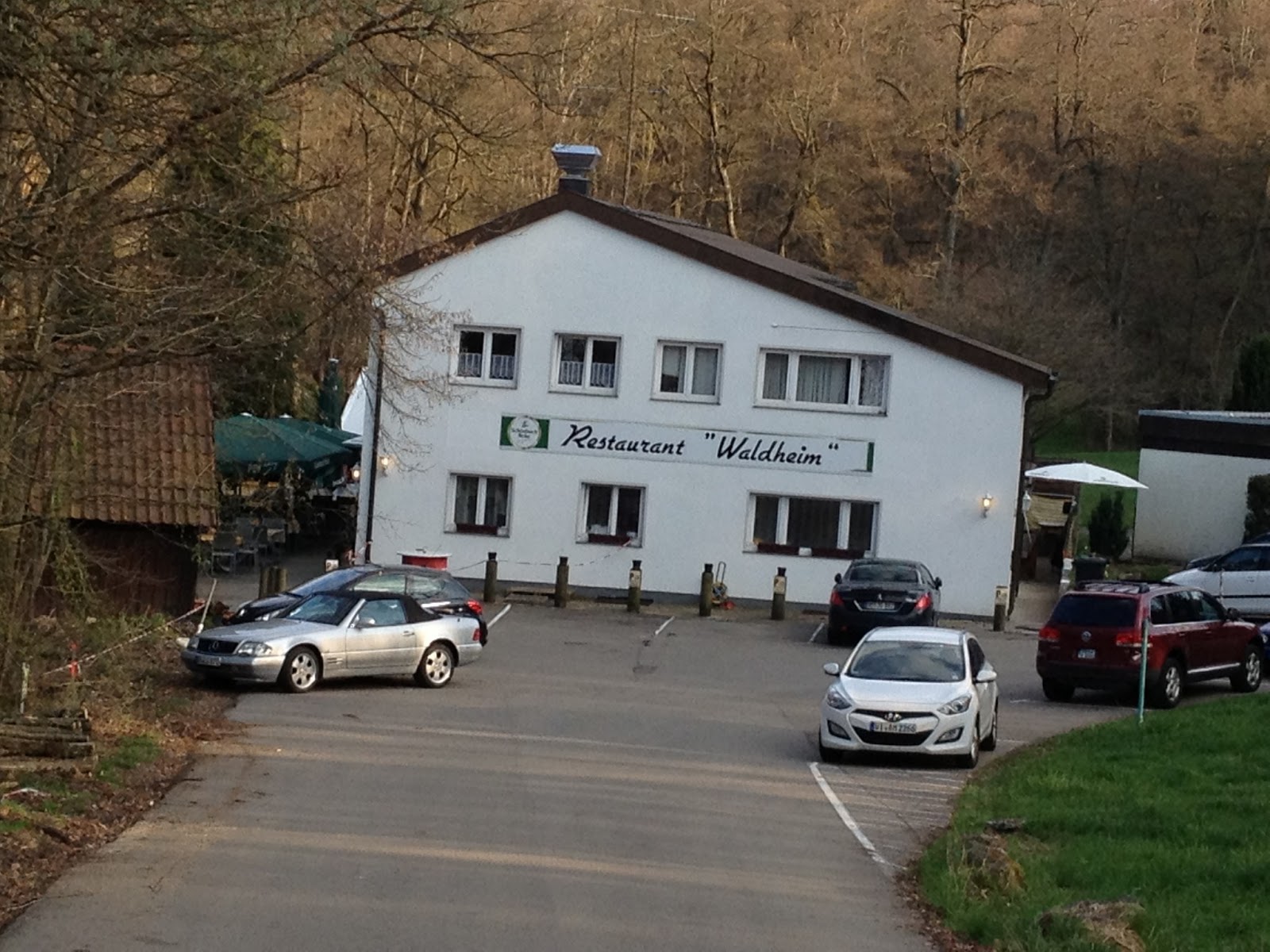 We were excited to finally be there, but a bit apprehensive as well.  We obviously don’t speak German yet, and there is always the possibility the restaurant doesn’t have anyone that speaks English.  As we walked up,  we weren’t really sure which side to enter from either.  The back patio was set up, and there were a few signs, but of course, written in German.  After finally deciding to try the patio first, we saw a few people outside and Jon went in to see if we could get a table.  Luckily, there was a server who spoke English and was very helpful.  After getting settled, I looked around and was speechless.  It was absolutely EVERYTHING I would want in a backyard, and then some!   I even told the server ‘This is beautiful” to which he only smiled and very matter of fact said, “It is” 🙂 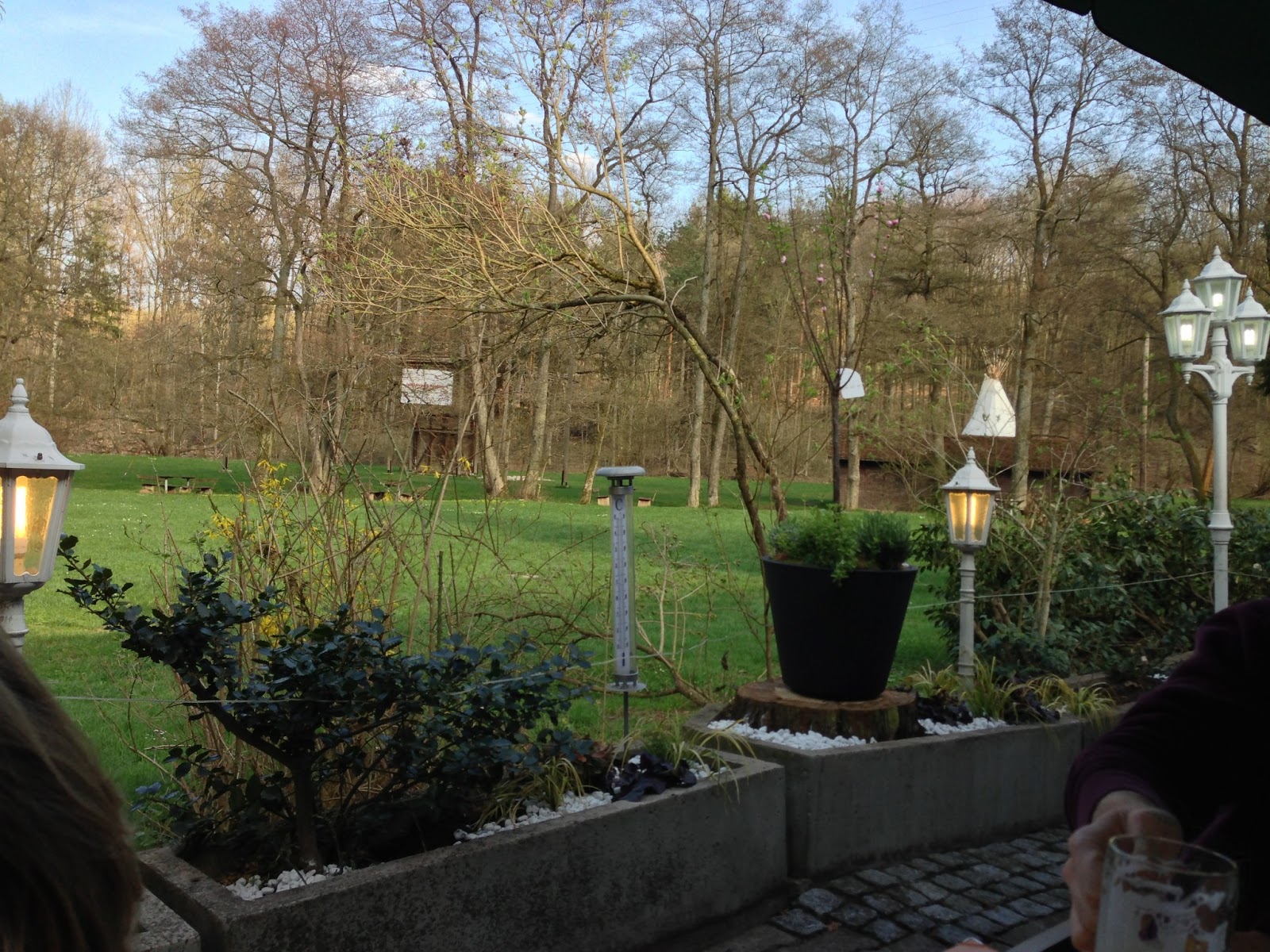 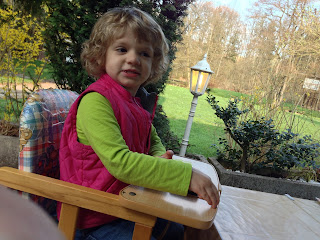 It was the perfect place for us to venture to on our own and felt like the quintessential German restaurant you think of when you think of Europe.  As we sat there, a few more people came to eat as well as those that knew the family.  By the time we left, there were about 6 or 7 older gentlemen sitting outside near the kitchen, having a beer and talking with each other and laughing.  It just added to the charm of the place and our experience.  We did ask for directions back to the base to see if there was a faster way, and of course there was.  I’m glad we decided to take keep going when we thought we were lost and it turned out to be ‘family fun time’ and not a ‘family fiasco’ 😉 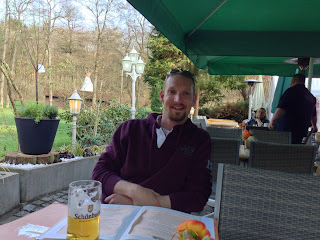