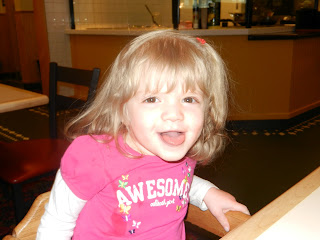 Madelyn got her tubes put in approximately 4 weeks ago and within days, transformed into a human parrot.  Her vocabulary has almost tripled, and she is so happy!  She can now say ‘eat’ when hungry, ‘mil’ for milk when she wants something to drink, and can repeat almost anything that you say.  Its so exciting!  She can count to 10 now, for the most part ( she keeps skipping ‘8’), and is starting to say her colors, even if they aren’t for the right colors.  We have started trying to get her to say ‘Mady Brown’, which she is getting closer to every day.  ‘Cheese pweese’ is her favorite phrase and she can say ‘ado’ for thank you when she gets the cheese.  Any animal that is black and white is a cow including zebras and dalmations.  Chick-fil-a is her favorite restaurant because of the cows.  She absolutely loves the cow costumed guy that comes out on Saturdays.  (She likes him, but not Santa?!?! :))   Everytime we pass a Chick-fil-a restaurant or an advertisement with the logo, she yells ‘Cow…mmmm’.  She also usually starts jumping or bouncing up and down while pointing 🙂 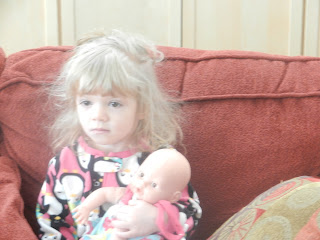 Her new thing over the last week or so has been ‘Finding Nemo’.  That is her absolute favorite movie/show right now.  She will sit and watch it for 30-40 minutes straight.  It’s one of those fascinating things to watch her watch a movie.  She either stops where she is the moment it comes on and you have to physically move her to the couch to sit, or she gets excited when she gets home, runs to the couch, grabs the remote control, and starts repeating ‘Nemo…Nemo’ until you put it on.  Most fish are called ‘Nemo’ now, including the goldfish snacks 🙂
I’m so excited to see who she has become 🙂